Basic income is simple. It’s a regular income unconditionally paid to every individual. It solves the problem of how to get spending money to consumers. That’s all it is and all it does.

Among the many things that basic income is not, it is not defined to be an amount of money that’s sufficient to meet people’s basic needs. It could be less. It could be more. The income is basic. What it buys need not be.

Poverty can only end if the economy has the capacity to end poverty. Basic income is not magic. It doesn’t make the impossible possible. The productive capacity of the economy determines the sustainable level of consumer spending. This, in turn, determines the achievable level of basic income. But the achievable amount is a separate concern from whether basic income is a good idea in the first place.

Victor Hugo once said something along the lines of:

There is nothing as powerful as an idea whose time has come.

This quote has caught the attention of basic income advocates. Now they’re tripping over themselves to bring us the good news: Basic income is that idea. It’s the idea whose time has come!

Has it recently become possible for us to end poverty? Has our world somehow changed in such a way that now makes basic income a good idea, when it wasn’t before? Was basic income previously a bad way to provide consumers with spending money?

It has become cliché within basic income circles to claim that “robots are coming for our jobs.” The presumption is that we therefore need to supplement people’s incomes. This implies that, until recently, wages were somehow a naturally sufficient primary source of consumer spending money.

But has there ever been a time in history when wages were sufficient? There’s certainly no rule of economics that says they should be. Nevertheless, both proponents and skeptics often insist that automation is a key issue in demonstrating the need for basic income.

On May 16th, our basic income discussion group explored some of the skepticism.

Unfortunately, the audio quality is terrible because this was the first session we streamed. If you would prefer not to suffer through the recording, what you need to know is that we talked about two articles, one supportive of basic income and one critical. The supportive article, entitled Universal Basic Income: An Idea Whose Time Has Come, is a blog post written by dicussion participant Madeleine Kando. The critical article, entitled Basically Flawed is from The Economist.

Both articles are from a few years ago, but they each represent common arguments that tend to arise in the debate about basic income.

The basic income is an answer to a problem that has not yet materialised. Worries that technological advance would mean the end of employment have, thus far, always proved misguided; as jobs on the farm were destroyed, work in the factory was created. Today’s angst over robots and artificial intelligence may well turn out to be another in a long line of such scares. — The Economist | Basically Flawed

It’s true that humanity has been worried about losing jobs for a long time. But the problem of how to supply spending money to consumers has been with us since time immemorial. Either you believe that basic income is an effective way to accomplish this, or you believe that there’s a better way. Are jobs the right answer?

Skeptics sometimes worry that people who receive basic income would stop working. But the labor market is a market. If the labor market needs people to work, it will pay them to work. We can certainly imagine a world in which people are less motivated to contribute their labor. But that wouldn’t be a bad thing if we didn’t actually need the labor.

It’s natural that we care about how people choose to spend their time and money. After all, we want everyone to be able to live happy and productive lives. When people harm themselves, it’s reasonable for us to want to intervene. Basic income doesn’t stop people from making bad choices. But regardless of whether people make the right choices, they still need spending money.

What would you do if you had a basic income? — popular slogan

The economy won’t produce what people don’t have the money to buy. When consumers have sufficient spending money, the economy can reach its full potential. The effects of basic income are macroeconomic.

Below is a popular visualization of how basic income works. 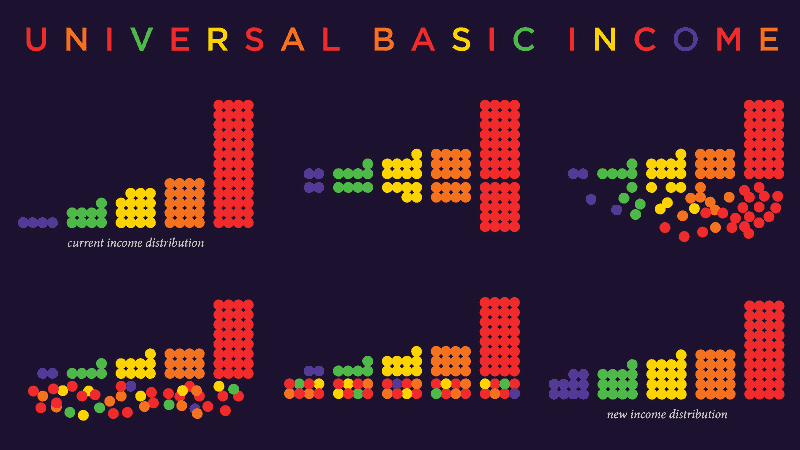 The only problem is that this isn’t how basic income ultimately works. If we wanted to, we could levy a tax that’s exactly the same size as our basic income. We could even tell a story about how the money being paid out is somehow a redistribution of the same money that was taxed. But as I said two weeks ago, tax revenue is meaningless. Our redistribution story serves no purpose other than to limit our thinking.

Basic income takes money from nobody and gives money to everybody. It does not address inequality and that’s OK. In and of itself, supplying consumers with spending money is important.

The point of this post isn’t to convince you that basic income is a good idea. That’s what the rest of the blog is for. I wrote this post because I want to help the basic income discussion break free of some of its worn-out narratives.

Perhaps you feel that the best way for people to get all their spending money is to earn it through a job. Whether or not you support basic income, there are fruitful conversations to be had. And those conversations probably don’t include the phrase “BIG idea.”